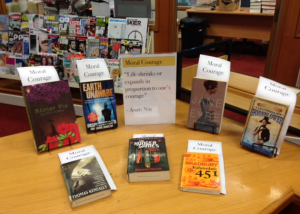 This term we are examining moral courage. It is one of the eight institutional values of King’s College and it is also at the core of our founding motto Virtus Pollet – or, Excellence of Character Prevails.
Moral courage can be defined as the power and determination to follow what one believes to be right, regardless of the cost to one’s self, and irrespective of the disapproval of others.
We have put out a display of books in the library where characters have demonstrated their integrity by being brave and doing the right thing, even if it was not to their advantage. The books include Mister Pip by Lloyd Jones, Schindler’s List by Thomas Keneally, Jane Eyre by Charlottle Bronte, Ender’s Game by Orson Scott Card, Lieutenant Hornblower by C.S. Forester, Fahrenheit 451 by Ray Bradbury and The Hunger Games by Suzanne Collins; but of course there are many more.

Today in the news we see an example of moral courage in Thailand where fact appears to be mirroring fiction. Some people in Thailand have adopted the three-finger salute used in the Hunger Games stories as “an expression of silent protest” against a military coup.

Although Marie Lu began working at Disney on their video games, and then went on to making Facebook games she really always wanted to be a writer, and as a writer she is an inspiration for all beginners. She began writing seriously when she was 14, but it was only when she had submitted her manuscript for Legend five times that it was accepted by G.P. Putnam’s Sons publishers.

One of her pieces of advice for aspiring writers is: “Read. Always. You don’t have to be capable of reading 250 novels every year like some amazing folks are. (I’ll admit that I’m a very slow reader and am probably only capable of really digesting about 25 books a year.) But you have to love to read. You have to constantly keep updated on what other authors are producing in your genre as well as outside of it. Know your industry. And most importantly, you have to read because you have a duty as a writer to support your fellow writers.”

Legend is the start of an exciting trilogy – the three books in the trilogy are:

There is no slow build up setting the scene, no explanation of how everything works, you start on page one and you are immediately  dropped into the thick of the action. A war is raging in America and events of life and death are taking place. Each chapter tells the story from the perspective of either June, or Day, two young people who are very similar but on opposite sides of the system.  Legend is a book about false loyalties and misunderstandings. It also about a rich political elite ruling a poor population who are struggling to survive in harsh conditions.  Sarah Rees Brennan, author of The Demon’s Lexicon Trilogy writes that Legend is “A compelling dystopic world, with diverse characters, high tension and political intrigue. It’s a cliche, but really: if you liked the Hunger Games, you’ll love this.” If you are the kind of person that likes to have a soundtrack playing for atmosphere as you read your books, then Marie Lu suggests this music.

Legend may also soon appear as a film. In July 2012 Marie Lu talked to MTV News about a screenplay being completed and passed on to CBS Films who hold the film rights …so watch this space.

Catching Fire is the second book in the Hunger Games trilogy. Give your imagination a boost, and make sure you read the book before you see the film which comes out in cinemas at the end of November 2013!

Divergent a must read for Hunger Games fans

The first book in the series

If you really enjoyed The Hunger Games series and you are at a bit of a loss to know what to read next, then have a look at the excellent  Must Reads for Hunger Games Fans list. This has been put together by two American sisters, Leslie and Julia, on their blog “Twobusybrunettes”. You can download the list which includes a Hunger Games similarity rating and a book description for 25 books; this should certainly keep you going.

In fact we have many of the books on this list in our library including Divergent by Veronica Roth. The “Twobusybrunettes” give it an 8 out of 8 star rating for similarity. It takes a few chapters to set the scene and then the pace really steps up. The second book in the series, Insurgent is equally exciting and the third book is due to be published later this year. It should be no surprise to learn that a film is planned directed by Neil Burger with Shailene Woodley cast as Tris, and Kate Winslet possibly about to join the cast.

If you can’t wait for the film due to be released in 2014, then I recommend you read the book and have a look at this trailer.