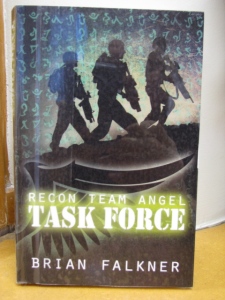 Just read the latest from Brian Falkner last night – Recon Team Angel Task Force. What a read! There’s no let-up from beginning to end. It is 2031, and the Angel Team are off on another mission behind enemy lines to try to save the world from the Bzadians. Their job? To prepare the way for a multinational task force to invade the alien homeland in the heart of Australia, now called New Bzadia. Things do not exactly go as planned, but the mission certainly leads to an exciting and unexpected ending.

Well worth a read for those who like their reading full-on! If you’ve not caught up with this series already, look out the first book, Recon Team Angel Assault. And it seems there is a third to follow – Recon Team Angel Ice War – according to the following book trailer: