Libraries come in all shapes and sizes… 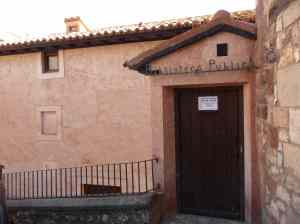 …But it’s still marvellous to see them.

During the summer break I spent some time in the tiny town of Albarracin in the Sierra de Albarracin mountains in north-eastern Spain. It’s a tiny town with a population of just 1025, according to the latest census (2007), but I was fascinated to note that in the midst of its narrow winding streets there was the pictured Public Library (Publica Biblioteca). Unfortunately it wasn’t open during the time of my visit so I can only show the exterior view.
Should you be visiting and travelling in Spain, I can thoroughly recommend a visit to Albarracin which is widely regarded as one of the most picturesque villages in all of Spain. It also is a popular destination for the “bouldering” fraternity – i.e. for those who climb rocks, not mountains.

The town of Albarracin

Another view of Albarracin

This entry was posted in Uncategorized and tagged Libraries. Bookmark the permalink.